Today was a banner day for capturing the rapidly increasing available energy from ol’ Sol, the original source of virtually all energy available on Earth except for atomic energy.

Last summer, after installing the heat pump, it became abundantly clear that even with our low-mass cold-start System 2000 boiler, we would still be using a significant amount of oil to produce hot water.

Back in the 80’s we installed a solar hot water system at our home in Chelmsford, MA.  We had clear southern exposure all day and with 63 sq ft of collector area we produced most of our hot water for a family of 5, year round, for 20 years.

Our home here in Wolfeboro faces south-east, and the roof is completely shaded after 1pm for 9 months of the year by a stand of very old white pines.  Bill Swaffield told me that when he was tree warden, that clump of pines was identified as the tallest in town.  Cutting them down is out of the question.

So the problem was how to make hot water with only three to four hours of morning sunlight. First we put a meter on the hot water line and determined that our usage averages about 28 gallons per day.  After working the numbers, I concluded that a system with two collectors totaling 52 sq. ft. would satisfy our needs.  With full sun, one panel would have been plenty. 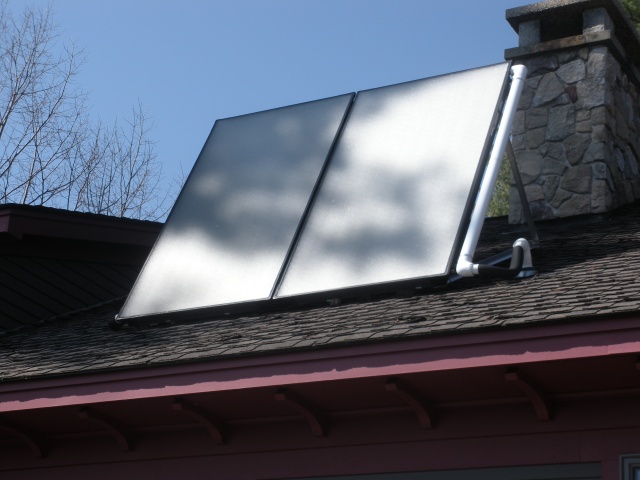 Here they are approaching 1 pm.  Notice the start of shading.

The mounting rack allows the panels to be raised from flat on the roof at 30° to this 60° position in winter.  The greater angle better matches the lower winter sun and sheds snow pretty well.  In the summer, the low angle will work better during the three months when the sun tops the southern trees and will hit the panels most of the day.

When the collectors are heated by the sun, an anti-freeze solution is pumped through them and circulated through a coil of pipe, called a heat exchanger,  in the bottom of a storage tank.  The water in the tank is heated.  Here is a plot of a few days operation:

This was a series of days March 9-12.  The temperature of the collectors (green) begins to rise around 8am and drops off sharply after noon (pre-DST) when the sun disappears behind the pines.  During the first and last days, while the collectors are hot, the temperature in the 60 gallon storage tank went to as much as 130 and 140 degrees.  Notice the middle day.  It was mostly cloudy and the collectors didn’t heat up much at all, and could not significantly raise the storage temperature.

Notice also that the temperature in the storage tank goes down steadily about 15º per day after the heating cycle.  That’s standby heat loss, and all hot water tanks and boilers lose heat to the outside.  Our tanks have 2″ of foam insulation so they are pretty good, but left alone, they will still cool down after a few cloudy days, so the idea is “use it or lose it”.  We will get back into the mode of doing hot water laundry on sunny days.  During the warmer months, that makes double sense because that’s the best time to hang them out to dry.

Here is a plot of the storage tank temperature for the past month:

While the tank reached useful hot water temperatures (120°) only a dozen or so days, it was consistently well above the inlet temperature which averaged in the low 40’s.  The water in the solar storage tank is fed into our 50 gallon Marathon highly insulated electric hot water tank.  By using the solar pre-heated water, we used less than half of the electricity that would otherwise have been used to heat that 43º water.  That’s during February.  As we approach the equinox, the solar percentage is going up, and for the next five months I expect it to average over 90%. 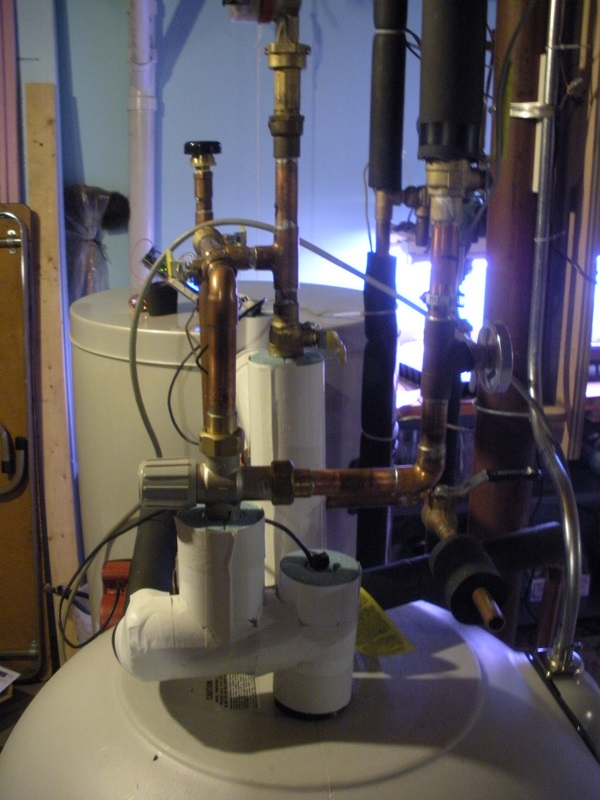 The Marathon electric tank is in the foreground.  It has a thermostatic mixing valve on the hot water out line that mixes cold water to limit the temperature to 120º.  That’s necessary because this summer the tank may get as high as 180º.

I’m working on a microcomputer control to mix the two tanks during the summer and to operate a distribution recirculation loop to minimize the wait and wasted water at the fixtures that are a long way from the tank.

Update: Someone asked about the blue glow in the background of the above photo.  That comes from Judi’s grow lights as she has started her seedlings for the coming gardening season.