The other morning as I was getting my mail downtown, and a woman handed me a flyer concerning the town hall issue: 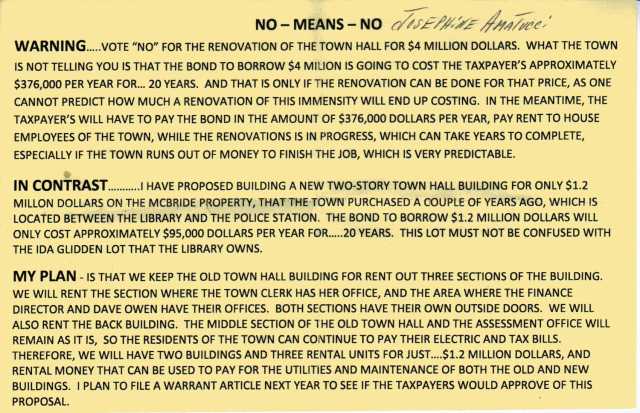 Ms. Amatuci has advanced alternative plans in the past, and the last one featured the Library campus as well.  I’m not enthusiastic about the location, or picking a fight with the Library Trustees, nor do I believe the cost estimates being thrown around are realistic.

But inept as the arguments may be, they have substance.  I’ve argued that for the equivalent of the first five years of bond payments, we could completely renovate the existing offices, pay as you go, without incurring 15 additional years of debt.  All through smaller, arms-length projects that avoid handing huge sums of money to a group with a horrible track-record to date.

We need a plan that addresses the concerns of both sides of this debate.  Fixing the offices and major building issues should be something the Friends could live with.  Keeping the project on a short leash and checking in with the voters each year should be acceptable to those who don’t trust the Friends with a blank slate and a big bag of money.  That’s where Selectmen Senecal and Harriman are leaning.

Otherwise, in the end, they will have separated us from the $6.8 million that we rejected so emphatically back in 2008.

This entry was posted in Brewster Hall/Town Office, Town Politics. Bookmark the permalink.

4 Responses to Another opinion